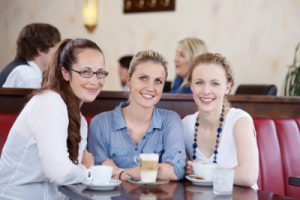 Imagine a scenario where all your friends are jumping off a cliff. If everyone jumps, do you jump as well? We know that the correct answer is supposed to be: “No, never! I am an independent thinker, and other people have no influence over me.” However, the truthful answer is, yeah, maybe you do jump. Everyone thinks they’re the exception here. We cannot suppress our human desire to fit in. Humans are social creatures, and our brain seems to be built to follow what other people are doing. When everyone else is participating in something, we tend to think it’s the smart thing to do.

Back in the day, when we were hunter-gatherers, if we saw our entire tribe heading east, we would have to follow if we wanted to survive. We didn’t necessarily have to know why we were going in that direction; we just trusted the judgement of others. So yeah, if everyone was jumping off a cliff, there’s a high chance you would follow. You wouldn’t want to be the only one that didn’t jump. Nobody wants to be cut out from their group of friends, so they go along to get along. It’s that human desire to fit in that drives this behavior. The media likes to scare us with shocking statistics about how we are all becoming lazy and unhealthy. While it may be true, that information is a double-edged sword.

Something like 80% of Americans don’t get enough exercise and around 40% of American adults eat junk food daily. The average American adult consumes almost 100 pounds of sugar per year. These statistics are meant to fill us with horror. But let’s be honest. If we find ourselves in the majority, all our brain hears is this: “What a relief, I’m just like everyone else. I guess I don’t have to change my behavior!” The more we hear those kinds of statistics, the more firmly we start to believe that this is what other people do, so it’s totally OK if we do it as well. If everyone else is getting fat, I guess it’s totally OK for us to be fat as well. When you are like 80% of other Americans, why would you need to change? You’re normal.

What other people do, and what is considered normal behavior, influences us to a remarkable degree even if we don’t notice it. To study how other people can influence us, two scientists got access to data that tracked more than 12,000 residents of Framingham, MA for 32 years. The results were staggering. They found evidence that weight gain and obesity could spread from person to person. Just like people can catch a flu from others, obesity was infectious and it was spreading within families and from friend to friend. A woman whose sister became obese had a 67% increased risk of becoming obese herself and a man whose brother became obese had a 44% increased risk. When someone’s close friend became obese, their risk increased by 57%. Those numbers are insane. Obesity wasn’t the only thing going around the Framingham community. When one person started to drink more alcohol, the drinking spread through the social networks well. The same with smoking. If someone started smoking cigarettes, people around them were more likely to pick up the same smoking habit.

As disturbing as all of this may be, some positive evidence was also found. That is that good behavior could also spread. When one person gave up cigarettes, it increased the odds that their friends and family would quit smoking too. When someone stopped drinking alcohol, the hangovers of their friends were far less common. And when one person lost weight, weight loss spread through their social network as well. So, the connection is clear: Both good and bad behavior can spread from person to person, and nobody is completely immune. However, your relationship to that person matters. Behaviors don’t spread over fences and backyards. They spread through a network of people who are close to each other. If you see a stranger smoking next to you, your odds of suddenly becoming a smoker yourself don’t increase. However, if a good friend of yours starts smoking, the chances that you’ll pick up smoking as well, increase substantially.

Basically, what determines if you’ll mimic a certain behavior, is how much you like that person. Therefore, choose your friends wisely. As we have seen, people who surround you have a bigger impact on your behavior than you might have thought at first. After all, they shape your opinion about what you perceive to be “normal”. If all your friends are exercising at the gym 5 times a week, you consider that normal behavior. That behavior may well rub off on you. You’ll go the gym as well, as that is what everyone else around you does. Now if all your peers are doing drugs 5 times a week, then you’ll perceive that to be normal. There is then a very high chance you’ll start doing drugs as well.

Now, if you don’t know anyone who shares your ambitions, no worries. You can surround yourself with some good reading material. Read books, blogs or watch videos if you dislike reading. You will be exposing yourself to inspiring stories while expanding your knowledge. So, while your friends influence your behavior, you mustn’t forget that your behavior influences those around you as well. If you want people close to you, to have more self-control and better habits, you need to set a positive example for them and act as if that is the norm. Improve yourself to a degree that makes people around you motivated and ambitious. In this way you can feed off each other’s success and propel each other forward. Lift others up and they will do the same in return.